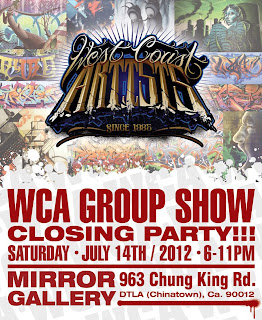 Due to an overwhelming demand we are having a closing night artist reception
for the West Coast Artists group show at Mirror Gallery this Saturday, July
14th from 6:00pm - 11:00pm (map attached).

WCA members are some of the most well known and biggest names in the
graffiti arts community, as well clothing designers, animators and graphic
artists.

What started in Los Angeles almost 3 decades ago as a group of young kids
sharing a mutual love of a new art form, WCA has grown to become a legacy of
creativity, originality and respect worldwide.

Many WCA members have become some of the world's foremost tattooists,
graphic designers and fine artists, as well as owning some of the best-known
design firms and clothing companies.

This may be the last time these artists come together for a group show.  If
you haven't done so you need to check it out.
Posted by MirrorFilmsLA at 9:26 AM No comments:

Posted by MirrorFilmsLA at 9:19 AM No comments: 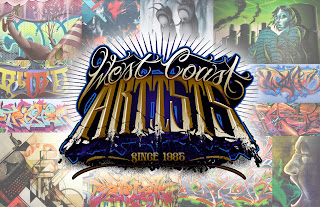 Recepton June 16th 6-11PM
Show dates June 16-July 10
One of Los Angeles' first, most well known, and most well respected crews.
Founded in 1985, and consisting of some of the biggest names in the graffiti art community for almost 3 decades. Many members have grown to become the worlds foremost tattooists, gallery artists, graphic designers and many  members own some of the worlds best known graphic design firms and clothing companies. What started as a group of young kids in Los Angeles, with a mutual love of a new artistic art form, has grown to become a legacy of creativity,originality and respect world wide.

Posted by MirrorFilmsLA at 10:32 AM No comments:

The award-winning duo, the Goetz Brothers, have joined Mirror Films. The directorial team made up of Kevin and Michael Goetz was welcomed to Mirror Films by Owner/Executive Producer Eric Barrett.

"I could not be happier the Goetz Brothers are joining Mirror," says Barrett. "I've been a huge fan of theirs for a long time. The body of work that they've accomplished for being so young is amazing. Their versatility is what wows me the most. From comedy dialogue, visual effects work, cars, kids, animals -- it is mind blowing how talented they are. Their future is as bright as any director working today."

For the Goetz Brothers, the decision to join Mirror Films came on the heels of their first feature film debut.
" We were looking for a forward-thinking, edgy company that was grounded by solid leadership and creative support," explains Director Kevin Goetz. "We were attracted to Mirror from the start due to the company's unique ability to cross pollinate through exciting new media opportunities while still remaining true to the traditional framework of the business."

Add Director Michael Goetz: "We are excited about the opportunity to work with Mirror and Eric Barrett. Eric is passionate about going after and making great content; his energy and enthusiasm is contagious. Described as the hardest working executive producer in town, Eric's relationship with clients came highly recommended from some of the top agency producers out there. We look forward to working with him."


Posted by MirrorFilmsLA at 10:34 AM No comments:

IN SELECT US THEATERS MAY 10th

Once upon a time… or maybe twice, there was an unearthly paradise called Pepperland, a place where happiness and music reigned supreme. But all that was threatened when the terrible Blue Meanies declared war and sent in their army led by a menacing Flying Glove to destroy all that was good.  Enter John, Paul, George and Ringo to save the day!  Armed with little more than their humour, songs, and of course, their yellow submarine, The Beatles tackle the rough seas ahead in an effort to bring down the evil forces of bluedom.
Posted by MirrorFilmsLA at 3:41 PM No comments: 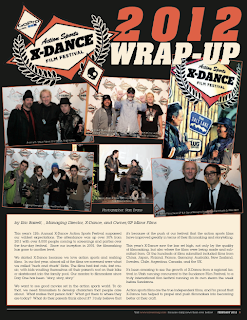 Posted by MirrorFilmsLA at 5:04 PM No comments:

New exhibit at the Mirror Gallery! 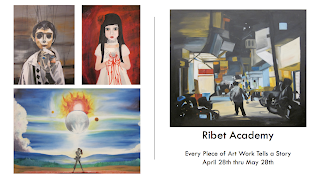 Director/Photographer Brian Bowen Smith has joined the roster at Los Angeles-based Mirror Films.
A protégé of legendary photographer Herb Ritts, Bowen Smith is now a sought-after celebrity photographer in his own right, having shot photographs of the world’s celebrity elite for such publications as “Vanity Fair,” “Esquire,” “Interview,” and “Gotham.”
Shooting his first commercial for Jenny Craig featuring actress/celebrity spokesperson Valerie Bertinelli, Bowen Smith’s unique talent came to the attention of Mirror Films’ Owner/EP Eric Barrett.
“I first met Brian when we were shooting the Jenny Craig campaign,” says Barrett. “We started chatting and it became clear to me that Brian’s aspirations were to expand into commercials. I then looked at his photography and was blown away by his visuals. Brian truly is an artist, but with a foot grounded firmly in the advertising aesthetic. After spending some personal time with him, it become crystal clear to me that this is someone that I want to work with.”
For Bowen Smith, the opportunity to sign with Mirror Films came at the perfect time in his career when he had decided to transition into the world of motion.
“I was shooting the print photos of Valerie Bertinelli for Jenny Craig, and then Valerie was kind enough to suggest that I shoot the commercial,” says Bowen Smith. “When I met Eric Barrett from Mirror on-set, we seemed to be on the same page in terms of my ability to cross-over successfully into commercials. As we talked more, I felt confident that I was signing with the right company and people who really understand my talent.”
From Screenmag.com
Posted by MirrorFilmsLA at 11:30 AM No comments:

Recap of Joan Tucker at the Mirror Gallery

From Argot & Ochre - Read the full entry HERE
Posted by MirrorFilmsLA at 11:28 AM No comments:

What we love about our neighborhood...Chinatown & Downtown LA

MirrorFilmsLA
Keeping you updated with our projects, directors and what's going on around the office.